I wrote an article about Madilyn and being her mother for the local family magazine Savvy Kids when we lived in Little Rock in July 2012. It recently came up in my Facebook memories so I thought I would share it with you.

Felt with the Heart, A Mother’s Memoir

“The best and most beautiful things in the world cannot be seen or even touched – they must be felt with the heart.”  – Helen Keller

I live each day remembering these words of Helen Keller. For there is beauty in images and tangible things, but the feelings you keep in your heart are yours forever. I’ve never let go of the concern I saw in the technician’s eyes when she told me she needed to go get the doctor during my first ultrasound visit. The only facts he could give me were that her eyes and face just didn’t seem normal. I would have to go to another hospital for a comprehensive ultrasound and amniocenteses to find out more. I remember the phone call I made to my mom on the way home, trying to figure out what had just happened. I had gone in to find out if I was going to register for girl’s or boy’s things for my baby shower, and instead left with the likelihood that the baby growing inside me had problems that were out of my control. The tears started gushing, and they didn’t stop for days.

The next ultrasound confirmed there was something wrong with the development of her eyes and nose, as well as her right hand. The amniocenteses results were “normal” and ruled out Down Syndrome and other syndromes doctors predicted. Research suggested that there could also be a problem with the development of her brain but nothing could be certain until after her birth. It was likely that she did not have any eyeballs and would be blind from a condition called anophthalmia. I had never even heard of a baby being born without eyes. I asked repeatedly how that could even happen, but no one had the answer. I was confused, sad, and even angry at times. After I researched all the information possible, the tears finally stopped and I began to enjoy the time I had left being pregnant.

My closest friends and family held a beautiful shower for me, and of course, I finally registered for the sweetest baby girl clothes and nursery items. I went on living each day as if everything was going to be perfect once she was born. The truth that lay deep in my heart though, was that no one really knew for sure what that day would bring. We weren’t sure that she would even survive after birth, or what kind of life she would have if so. The only comfort came from the support of my closest family and friends, and my faith in God and prayer.

I’ll never forget the day she was born, even with all the medicine they gave me. It was Presidents’ Day, 2005. A strange sort of peace came over me that morning. I put it all in God’s hands and asked Him for nothing short of a miracle.

And He delivered. Seven hours later in a comfy little room in the corner of UAMS, Madilyn Grace Welch was born into this world. And she was a miracle. I was only able to see her for a few seconds before the nurse whisked her away to the Angel One team waiting outside my door. But her face was beautiful. Her eyes were closed. Her tiny arms and legs moved around like she was stretching. She wasn’t even crying. I was so exhausted from delivery that I didn’t stop to think what any of those things meant. A little later, the Angel One team brought her back in for me to gaze upon for a few minutes. It was two long days before I was released from the hospital to visit her in the NICU at Arkansas Children’s Hospital.

Madilyn spent the next two months in the NICU while doctors figured out a plan for her care. Most doctors had never quite seen such a unique case as hers. She was diagnosed with bilateral anophthalmia, craniosynatosis, undeveloped nasal passages, a club foot, hip dysplasia and a slightly misplaced pituitary gland. (Later we would find out she is deaf in her right ear.)

Alone, each of these issues had a typical treatment plan; together they made everything tricky. In short, a feeding tube was placed. At one month, she had a tracheotomy so she would have two ways for breathing safely. I fought the idea of the trach for as long as I could. It saddened me to think that she could not see to communicate, and with the trach she would not be verbal either, until she was older.

Before we could take her home, I learned how to care for Madilyn at ACH. I was taught what to do if the feeding tube popped out, how to suction, clean, and change the trach, CPR for children, how to use the medical equipment she needed, and a million other things I’ve happily forgotten by now.

Finally, we took her home. It was the scariest and happiest car ride I’d ever taken.

The last seven years with Madilyn have taught me patience, empathy and unconditional love. She leads me down a somewhat challenging path and into her world of touch, sound and taste. It is second nature for me to analyze and describe everything we encounter along the way. I find the words to portray the beauty of a sunset or the intricate details at top of the tallest building, too far for little hands to reach. I get the rare chance to interpret things more fully than I would ever take the time to think about if she was not blind. I have learned to be strong and confident, especially in advocating to provide her with the best opportunities. I don’t give up.

At the end of the day darkness falls upon us all, but the memories, wisdom, and love we embrace, shine in our hearts forever.

Madilyn challenges me to think differently, especially in teaching her. We are both at our best

working at home and discovering new things together. I am instructing Madilyn how to read and

write Braille, along with the regular first grade core curriculum. All the lessons have to be adapted.

Some are too advanced for her, so we keep them for later. Others she already knows and we have to

look to future grades for something challenging. We base most lessons on science or a good book.

Madilyn learns best when she incorporates listening and talking with touching and manipulating.

We have fun exploring the world and making new discoveries each day. True comprehension is built

when she experiences the lesson first hand. I struggle to find activities she can participate in with

kids close to her age.

Madilyn cannot play with most toys and games as her sighted peers, since most toys are

predominantly visual. Her favorite things to do are riding the train at the Little Rock Zoo, yoga

lessons at the Floating Lotus Yoga Studio, piano lessons, and Miracle League baseball. We are

adults in the area.

*This article was originally published in Savvy Kids Magazine, July 2012

An accessible PDF download version is available as well via the link above. 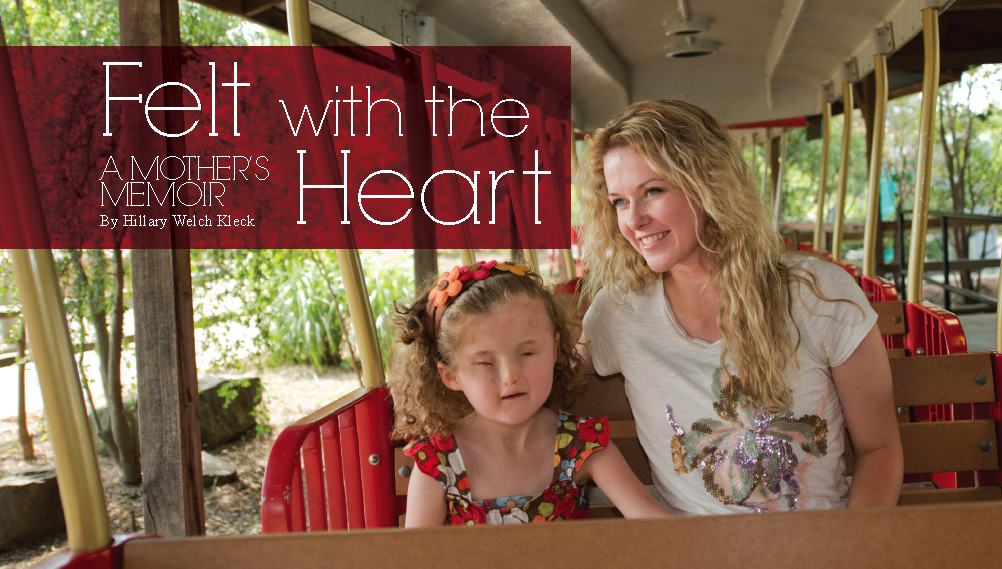